Narrowing the gap and driving some demand back into the market.

Land prices in Sydney saw a significant growth over 2014/15 and 2015/16, narrowing the gap and driving some demand back into the market.

New housing demand has risen, and Sydney recorded its highest level of residential land production over 2016/17. The same thing happened to Brisbane, recording a consistent moderate upturn since 2013/14.

Meanwhile, Melbourne was already past its peak in 2014/15 but it has remained high in the past two years. Interestingly, the significant rise in new land and house activity has been exceeded by new apartment construction, which is forecast to enter a modest oversupply from 2017/18.

While lot production is likely to remain high in 2017/18 as recent pre-sales of residential lots are delivered, the resultant weaker demand will cause lot production to fall away from 2018/19

An expected softening in house price growth over the next two years is projected to play through to land prices, making it hard for developers to maintain margins as construction costs continue to escalate.

According to BIS Oxford Economic’s Outlook for Residential Land 2017 to 2022 Report, residential lot production in Sydney, Melbourne, and South-East Queensland is approaching its peak and will begin to fall away. However, Zigomanis said the projected downturns in the eastern state centres are likely to be moderate.

These state centres, particularly Melbourne and Brisbane, have seen new supply in the apartment sector as they continue to experience a deficiency of detached house stock.

“Steady price growth in houses in the initial stages of the housing construction upturn improved land price affordability and shifted some demand from the established house market, to the new house and land market,” Zigomanis said., “This not only encouraged a greater percentage of home purchasers to opt for a new house over an established one but also established house owners to sell up and upgrade to a new, larger house.”

Australia’s east coast cities may see demand for house and land packages diminish in the face of the oversupply of apartments brought about by the current building boom.

Industry watchers from BIS Oxford Economics predicted a decline in demand for new homes as people take advantage of lower unit costs and rents in Brisbane and Melbourne.

Housing affordability has improved across all states and territories, enabling more first-home buyers to enter the property market, according to the Media release-6-december-2017-Sept-2017-quarter by @GillandDebello #property #propertyinvestor https://www.slideshare.net/GillandDebello/media-release6december2017sept2017quarter

What Is The Spread In The Cost Of Housing?

Meanwhile, the overall number of first-home buyers increased by 22.8% over the quarter and 32.6% over the year.

“The increase in housing affordability across all states and territories is to be welcomed and is reflected by heightened activity in the number of first-home buyers coming back into the market,” said Darren Kasehagen, head of business development and strategy at Bendigo and Adelaide Bank. “Housing affordability is still a major issue in Sydney and Melbourne, but there are some bright spots in the latest report from the other capitals that are also worthy of note.”

“Nationally, the average loan size to first home buyers increased to $319,500, or by 0.6 percent over the September quarter – but decreased by 0.1 percent over the past twelve months,” Kasehagen said.

The average loan size for all borrowers decreased to $380,900, with the total number of loans increasing by 4.2% for the quarter or 12.5% year-on-year.

The year that was…

The Reserve Bank’s December Bulletin has painted a bleak picture of the homes first-time buyers can afford, particularly in Sydney.

First-home buyers can afford smaller homes further from the city than they were able to afford in the past, according to the report titled ‘Housing accessibility for first-home buyers’.

The report states the median first-home buyer can afford about one-third of the homes in Australia – 32 percent, and about the average rate of the past 20 years. However, the situation varies enormously from place to place.

The average potential first-home buyer in Sydney could only afford 10 percent of homes sold in 2016, according to the report. Over the past 20 years, first-home buyers have generally been able to afford 10 to 30 per cent of the homes for sale in Sydney.

And in regional areas, the median first-home buyer could afford almost half the housing stock for sale. 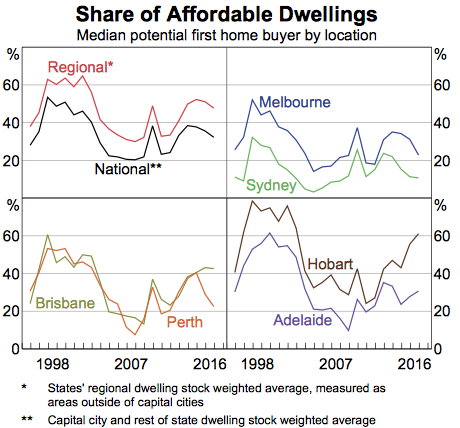 The quality of first homes has deteriorated across the board, the report claims but has worsened to the greatest degree in Sydney.

The average number of bedrooms inaccessible homes has fallen in all capital cities over the past 20 years, and the most sharply in Sydney. 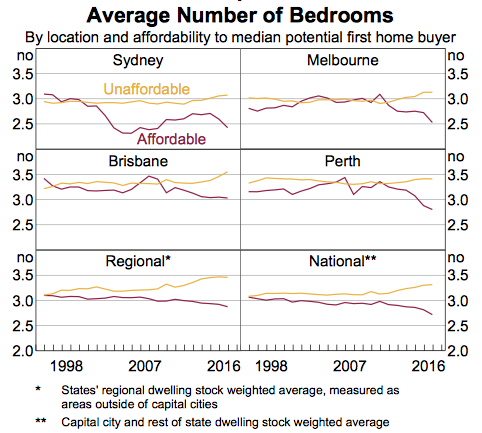 First-time buyers could also only afford to live further from the city. The average distance between affordable homes in Sydney and the CBD had risen steadily over the past 10 years. 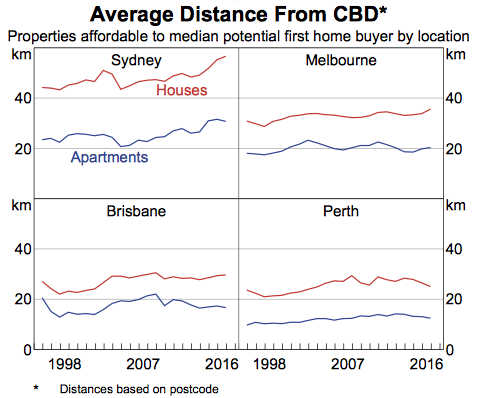 The report also finds that the number of households renting has trended up is recent decades, and rent-to-income ratios for lower-income households have risen in the last 10 years.